FROM THE LATER 1970'S TO 2011 TO THE PRESENT, HEALTH CARE DELIVERY HAS CONTINUED TO DECLINE TO ITS CURRENT GUARDED CONDITION.
"LET THE BUYER BEWARE", BECAUSE ONLY THE CONSUMING PUBLIC CAN RESCUE THEIR HEALTH CARE.


Fellow Senior Citizens. Take 6 minutes and see what Obama and the Congress have done this time.

Looks like Obama has Snuck another one in on us!!!

IF YOU NEVER WATCH ANOTHER 6 MINUTE VIDEO - WATCH THIS ONE! DR. DAVID JANDA FROM ANN ARBOR AND A NATIONALLY KNOWN HEALTH CARE EXPERT SPOKE TO US ON SUNDAY, OCT. 10TH IN SALINE, MI. THIS IS WHAT IS 'GOING' TO HAPPEN IF OBAMACARE IS NOT REPEALED. DR. JANDA, AS HE STATES IN THE VIDEO, TESTIFIED BEFORE CONGRESS AND THIS IS WHAT HE WAS TOLD. THIS WILL SEND CHILLS DOWN YOUR SPINE - GUARANTEED.
CARE ENOUGH ABOUT YOUR FAMILY, FRIENDS, NEIGHBORS, CO-WORKERS AND SEND THIS TO THEM ALSO.

I PREDICTED THIS WHEN SUCH AN APPROACH WAS FIRST PROPOSED.
Many if not most Medical Malpractice suits are brought out of ANGER on the part of the patient or family. They don't want an apology; they want BLOOD.

Meanwhile, a small minority of mal-occurrences are the result of actual malpractice. And of those that reach Court, 70% are won by the defendant on the merits.

What a waste...except for the Trial Bar.  The best solution is the formation of Special Health Courts, as is the case with Bankruptcy and Patent cases, administered and adjudicated by experts in Health Care and in Health Law.

A few facts:
1) About 50% of a patient's health care costs are incurred in the last 6 months of his/her life.
2) Over 70% of people agree with the desirability of having a "Living Will / Advanced Directive" and a designated Health Care Advocate.
3) Only about 20% of people actually have taken these actions while they still can.
IF YOU WANT THE ABILITY, AT SOME POINT, TO SAY "STOP THE WORLD; I WANT TO GET OFF", YOU HAD BETTER GET OFF YOUR BUTT NOW!


Obamacare and you: An explainer - CT Mirror 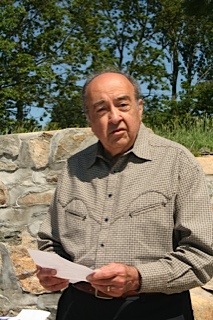 Portrait of a physician as an older man - CT Mirror

The following are based upon the speaker's presentation, my contemporaneous comments, a review of his slides and my reflections.  My comments are presented in italics.

I have been speaking and writing on this subject - Health Care Delivery - since the mid- 1970s.   Several of these commentaries are available on this website (www.asthma-drsprecace.com).  And any one of them could be re-published with very little change at this time.  So:

"Now is the time for all good men to come to the aid of their Profession".

As a practicing physician for 55 years, and as an attorney practicing and studying Health Care Law for the last 28 years, I have been writing and publishing on this subject for decades.  Much  of this production is available on relevant sections of my web site (www.asthma-drsprecace.com).

In fact, an early publication, dating back to 1978, could be re-published with only minor revision…reflecting how little progress our society has made in addressing the real issues of Health Care Reform.

The “Accountable Care Act” (aka ACA and ObamaCare) is a Christmas Tree of “wants” that gives short shrift to the real needs awaiting health care reform.  As such, that ode to political expediency needs to be repealed and replaced.

“With what”, you say.  Alright: ONCE MORE, WITH FEELING.

A comment about the much-discussed “Electronic Medical Records”.  These have been given a very high priority and much pressure by our “leaders”…not because they are so important, but because they are the easiest of the above issues to address.  Easiest, but not in-expensive and definitely disruptive of the vital eye-to-eye physician / patient and physician / physician relationships on which all good medical care rests.

And so, what is the prognosis of the above 6 vital areas of reform being addressed and implemented any time soon?  Poor to Grim.  Meanwhile, actions in the direction of ObamaCare and of “Universal Health Care” will produce the opposite of desired goals: lower quality, higher cost, and reduced access.    Folks, it’s your choice…and your life and livelihood.

MUSINGS ON THE RECENT BOARD RETREAT

WE CAN DO ALL THIS !

"ObamaCare", as enacted last year, is a Christmas Tree of wants, without dealing with true needs for health care reform.  And it is supposedly "paid for" through gimmicks and slights of hand.  What follows is a list of true needs for reform, from a practicing physician of 54 years experience...and counting.
Are you ready for this?

Bill Clinton made famous the phrase " Ah feel yo pain".  Physicians have been trying to shield their patients from the pain of the last 25 year of "health care reform", with poor results.  It is time for patients and the public to feel their own pain in order finally to become  motivated toward their own self-help and against the often craven and self-serving actions of their elected leaders.  The alternative, on which course we have already begun with "ObamaCare", is lower quality, less access, and higher cost.
The choice is yours, folks.

...AND, IF HE ADDS MEANINGFUL MEDICAL MALPRACTICE TORT REFORM - RESPONSIBLE FOR 25% OF ALL HEALTH CARE EXPENDITURES - TO THE PLAN, PAUL RYAN GETS A BIG SLOPPY KISS FROM ME.
See also my writings going back to the mid 1970's.

Republicans say they want to "repeal and replace" the health care law President Barack Obama signed last year, but they are a lot more specific about the first half than the second. Rep. Paul Ryan wants to bring some balance to the slogan.

In a Sept. 27 speech to the Hoover Institution at Stanford University, the Republican chairman of the House Budget Committee supplied an Obamacare alternative of his own. Ryan has the right diagnosis of what's wrong with federal health care policy, and the right prescription, too. He just needs to adjust the dosage.

Thanks in large part to Ryan's efforts, congressional Republicans have already embraced two of the ideas in his speech. They want the federal government to give states a fixed amount of money to run Medicaid, instead of paying for half of whatever the states decide to cover for the poor. And they want to replace Medicare with "premium support" for future senior citizens, who would purchase private insurance using capped federal subsidies.

But Republicans have had less to say about the uninsured, or the majority of Americans who are eligible for neither Medicaid nor Medicare. They have advocated tort reform and the creation of an interstate market for the purchase of individual insurance, both of which might make coverage a little bit more affordable. But as Ryan acknowledges, that's not enough.

He believes that we should change the way the tax code treats health insurance. Employer-provided coverage is not taxed on par with wages, and thus the federal government encourages companies to offer coverage rather than provide higher wages and let employees buy coverage. The more expensive the coverage, the more the tax break is worth. The fundamental flaw of Obamacare, as Ryan sees it, is that it leaves the inflationary incentives of current policy in place.

Under Ryan's proposal, the tax break would become a credit available equally to those who get coverage from their employers and those who buy it themselves. Anyone who wanted to buy coverage that costs more than the credit would have to pay the difference themselves. The expectation is that people would buy less expensive coverage and more often pay for routine expenses out-of-pocket. The new cost pressures thus created would, together with competition, drive prices down.

Individuals would have more control because they would be more likely to own their insurance policies rather than rely on their employers. Over time, the problem of people who can't get insurance because of pre-existing conditions would diminish, because people would have to change insurance less often. "This is the 21st century," Ryan tells me. "People do not have the same jobs for their entire careers. The tax benefit should be attached to the worker, not to the job."

Sen. John McCain, an Arizona Republican, made a similar proposal during the 2008 campaign, and the Obama campaign attacked it relentlessly as a new tax on employer-provided coverage. (Within two years, Obama had enacted his own new tax on employer-provided coverage as part of his health-care overhaul.) The McCain experience does not faze Ryan. "He did a very, very poor job of defending the idea," he says. "This is not taking away a tax benefit, it is improving a tax benefit for people." People making low incomes, he points out, would get a larger tax benefit under his proposal than they do now.

Asked to explain his colleagues' reluctance to embrace this reform, Ryan says, "I think people are just politically risk averse. As you know, I am just more of a policy risk-taker."

It may be that voters, too, are more risk averse than Ryan.

They have repeatedly demonstrated a preference for the health-insurance arrangements they have today, faults included, over politicians' visions of some better system. That was one of the major political obstacles to Obama's health legislation - and the reason he kept insisting that it would allow everyone who liked their existing coverage to keep it.

Ryan's colleagues have shied away from his reform because they fear the voters' fear - especially because they already think they took enough risks on Medicare. Modifying his plan may be a prerequisite for getting Republicans on board as well as the public.

That important caveat aside, however, Ryan is on the right track. A credible conservative alternative to Obamacare has to involve changing the tax code. And without a credible alternative, Republicans won't be able to repeal it, let alone replace it.

Ramesh Ponnuru is a Bloomberg View columnist and a senior editor at National Review.

Medical Savings Accounts: An idea so good for patients and for health care delivery that it has been kept under wraps by the Health Insurance Industry for fifteen years, as long as I have been espousing it.

"Health Plan That Puts Employees in Charge of Spending Catches On," the Wall Street Journal, January 8, 2002, Section B